Many different types of electric switches are used in pointing devices, but most frequently they're one of three major kinds, commonly known today as "Omron-style", "Panasonic-style", and tact button: 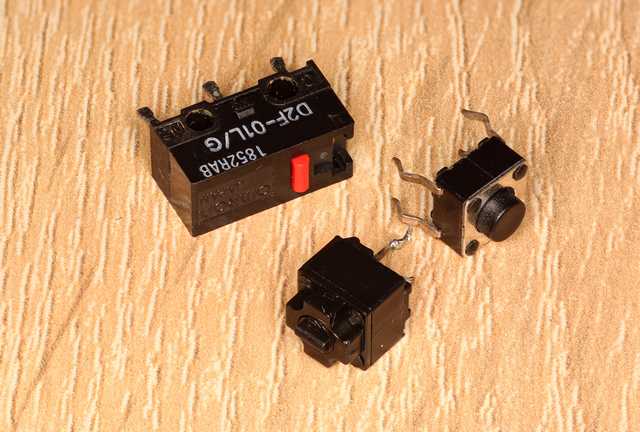 Dominant type of switch used in mice is definitely "Omron-style". Actually, that company is just one of many manufacturers, while history of microswitch invention is worth separate article: viewtopic.php?f=12&t=120

The design is simple but effective: spring-loaded contact move between two limiters. Actuating pin is separate part. Switch could be opened without desoldering from PCB and serviced: contacts cleaning and spring re-tensioning may prolong its life if the replacement is not available at the moment. Many variants are available, with different leads, gold plating, additional actuators ets. - but most widely used is a simplest form: 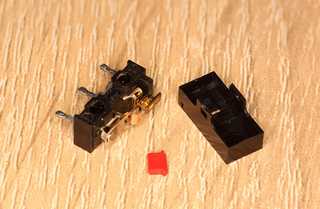 Another popular type is ~6x6mm square, known mostly by Matsushita (Panasonic) EVQP0E07E model. Actuating force and feel are pretty much the same. Size is more compact, and it does have just two leads: no need to provide additional space and hole on PCB for third (normally-closed) one, useless in mouse. Lead pitch and location of actuating pin allow this switch to be used instead of 3-pin "Omron-style"ones described above. Disc-shaped membrane is pushed by soft elastic insert, with plastic piston attached to it: 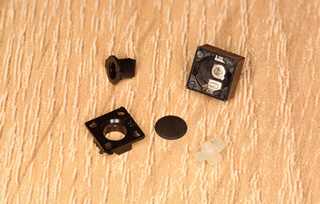 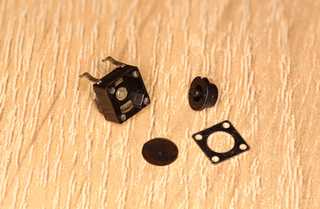 2-pin and 4-pin versions are manufactured, as well as variants with upper metal plates with additional pin(s), including side-mounting form: 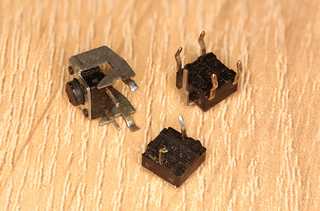 Formerly, in many early trackballs the keyboard switches were used (e.g. made by Cherry), but they've been eventually abandoned as they're less convenient for clicking because of too long travel.
Top
1 post • Page 1 of 1