It's possible to connect particular type of mouse to the different computer interface, using appropriate adapters or converters. There's generally two kinds of such things, both designed for the same function, and looking identical: some piece of hardware connected between mouse and PC - but the difference is quite big. Often it causes misunderstanding and confusion after attempts to use them improperly.

First kind - simple adapters, having the socket of one type and the plug of another, with just plain wires interconnecting appropriate contacts. Such "dumb" adapters are designed for multi-protocol mice, capable to work with more than one interface. The electronics in mouse controller performs power-up diagnostics, evaluating the signals present and determining what's currently connected to, then switch itself into appropriate mode of operation. Widely known examples of such adapters are USB to PS/2, ADB to USB, and PS/2 to COM. Also, adapters for wide to narrow variants of COM port (9-pin and 25-pin) are sometimes needed: 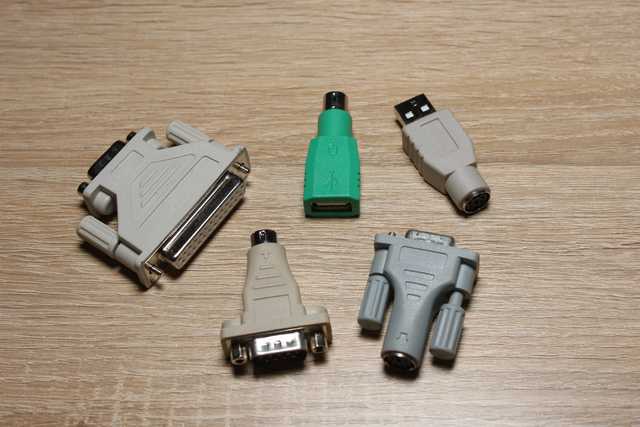 NB: the only function of adapter is to provide physical connection - so they're useless if particular mouse does not support additional protocol!

Second kind - real converters, also having the socket of one type and the plug of another - but instead of interconnecting wires, they contain complicated microcontroller capable to "translate" one type of data into another. Mouse connected to its input behave like if it's connected to the PC it was originally designed for, while the computer connected to its output thinks that its own natively compatible mouse is plugged in. In some cases, such "smart" converters provide also the electric signals voltage conversion in addition to the logical data, like in case of COM to USB one. The "brain" of converter constantly does a translation job, receiving the messages from mouse and changing them into required format to be passed to the computer. Some models have status LED indicators, very convenient for diagnosing and monitoring the transmission: 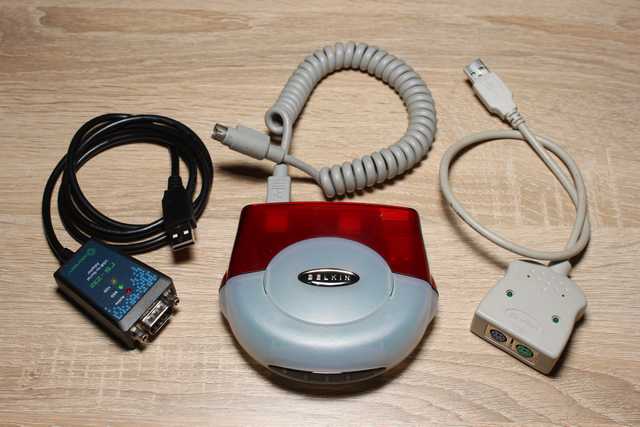 (dark one is not actually converter, it's an external RS232 port for the PCs lacking one - but included here as it's function is essentially the same: you can connect serial mouse to the computer's USB port).


The USB and PS/2 converters to the component output (quadrature, a.k.a. "bus mouse"), designed mostly for connecting modern mice to the ancient PCs like Atari and Commodore: 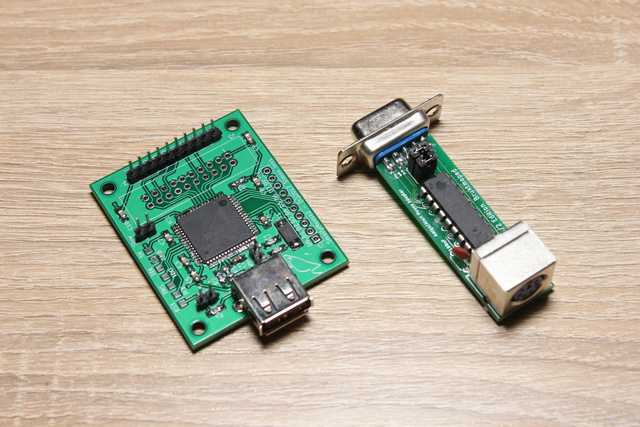 For adaptation of old trackballs, perhaps most frequently needed converter type is a PS/2 to USB one. Plenty of variants are available: designed as a "dongle" with short PS/2 cable connectors, separate box with cable connectors on both ends or USB only, and rigid adapter with no cables. All the types known to me have two PS/2 inputs, to connect a mouse and keyboard to single USB port. In some cases, keyboard port might be useful for additional functionality, like in this example of button signal injection. 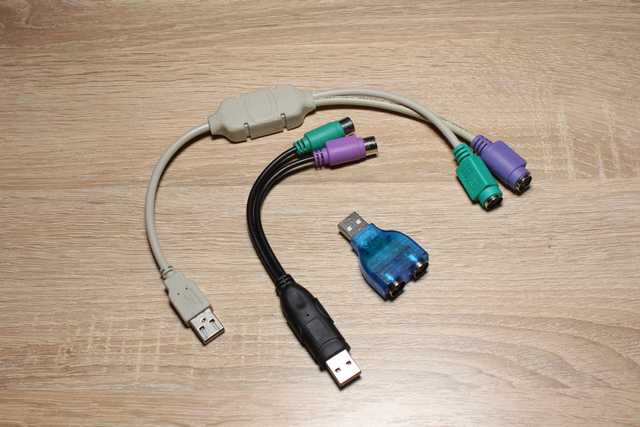 Any type is suitable to be used as a source of controller, but cabled variants are easier to work with. Basically, all that is needed is opening of the case (by cutting molded shell, separating of plastic halves, etc) and desoldering the cables. With single-piece converters, desoldering of connectors require hot air gun. Check whether the PCB have any markings of input/output contacts, and if not - inspect with DMM where each pin is connected to prior to desoldering. 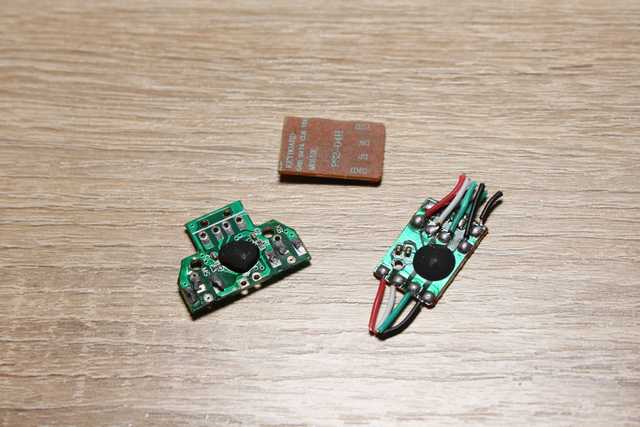 Extracted PCB easily fits into almost any trackball: after connecting to the device output, appropriate USB cable should be placed instead of original one.

Note that common PS/2 to USB converters are capable to provide just 3 mouse buttons signals: additional ones, like 4th. and 5th. "back" and "forward" ones, are beyond of original PS/2 protocol specification - so, they're ignored. Extended functionality requires direct connection to the real PS/2 port and proper initialization. Nowadays, the only way to use additional buttons on PS/2 mice is a DIY converter (typically, an Arduino-based).