Proprietary Hewlett-Packard peripheral interface, introduced in 1985 and lasted for about ten years.

The concept was similar to USB: multiple devices connected to one port, with software auto-configuration based on device's identification data. Instead of using hubs, devices were daisy-chained: each device should have two different ports: input and output. The last one in chain was allowed to have single port. Typically it was a mouse, as there's just too little space for connectors, so permanently attached cable was used - but one funny example was a trackball. Third-party one (Evergreen Systems Diamond DTXL-3) was made fully compliant with HP-HIL design guidelines, while HP's own trackball (M1309A) was equipped with 1 port, despite plenty of room available: 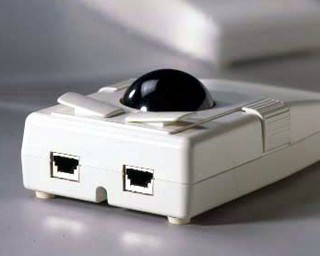 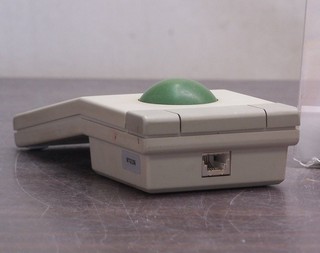 4-wire cabling was used; with +12 volt DC power (up to 750 mA) provided to devices, and +5 volt signals for serial data transmission. Devices were powered by +5 volt internally, while increased line voltage was intended to compensate loss in cables: feature just recently added to latest USB 3.1 standard as 'USB Power Delivery' specification. Up to 7 devices could be connected to the computer, and up to seven buttons were supported for pointing device - compare this to the typical 2 or 3 buttons in other standards of that era!

Connectors were similar to common RJ-45 ones, but with two side latches instead of single central one, and a key ridges to prevent incorrect connection. Type is SDL (Shielded Data Link) developed by AMP (now TE Connectivity). Additionally, input and output connectors were marked by white and black colors and/or one and two dots, respectively. 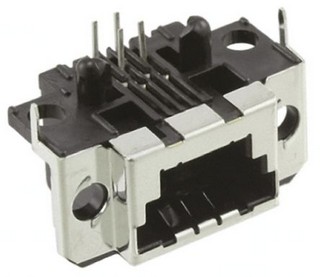 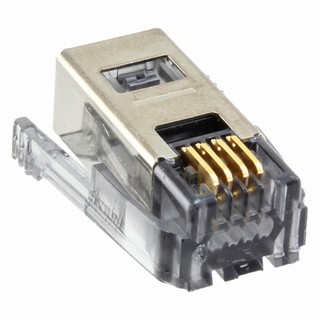 Communication was handled by two specialized ICs specifically developed by HP for that: MLC (Master Link Controller), installed in host computer, and SLC (Slave Link Controller) in each peripheral device.

Adapters (protocol converters) were available to connect PS/2 devices to HP-HIL bus, made by HP and third-party vendors: 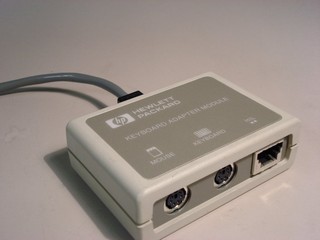 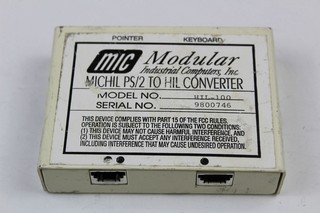 HP also offered A4220-62001 converter to connect HP-HIL keyboard to the PS/2 port, and 46094A adapter for connection of quadrature port (a.k.a. 'bus mouse' - quite common interface for mice and trackballs of that time) devices to HP-HIL bus: 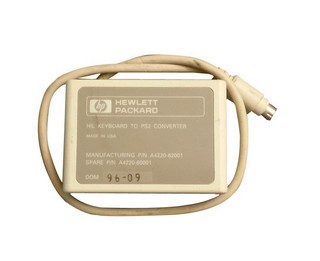 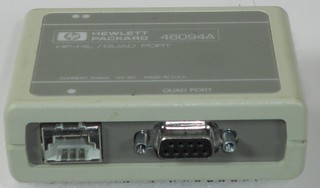 Later, in the mid '90s, HP discontinued this interface, and switched to PS/2 peripheral connection. On some HP computers (HP Visualize J-Class workstations), both PS/2 and HP-HIL ports were present.
Top
1 post • Page 1 of 1