Released in 1994, it was a revolution in the optomechanical era. For the first time, it allowed contactless reading of ball surface movement, eliminating whole set of problems associated with earlier designs: skipping, uneven movement, frequent cleaning. Principle of operation requires special pattern on the tracking surface, so it was used exclusively in Logitech trackballs. 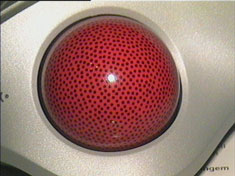 The only requirement for surface is, to have irregular marks different to the background - so, any contrast combination of colors is possible, and even invisible to the eye infrared one (with visually smooth uniform surface) was mentioned in Logitech patent. In practice, though, only single combination was ever manufactured: red balls with black speckles on them.

Technology was used in all Logitech optical trackballs prior to laser models.
Top
1 post • Page 1 of 1