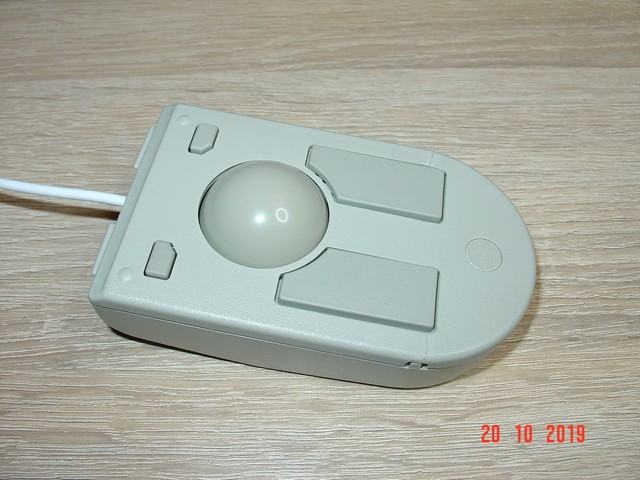 Combo device, switchable between mouse and trackball modes. Released in 1991 for IBM's L40 SX laptop, with idea of using as a mouse on the desk and as a trackball when working surface isn't available (e.g. during flight). Mouse side is similar in shape to the IBM PS/2 mouse model 6450350. IMHO, mouse mode isn't convenient: it does not have typical mouse sliding feet, but anyhow it's possible to use it that way. Trackball mode, on the other hand, is quite good: ball movement is really smooth. Old review in PC Magazine Oct 1991 also states "Of the two implementations, the trackball mode is more workable". Seems like IBM was thinking the mouse mode would be a primary one, as the company logo is on "mouse side", though. Design is covered by US patent 5,063,289. 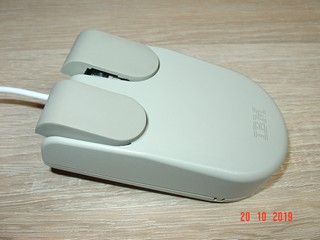 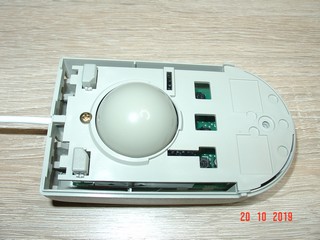 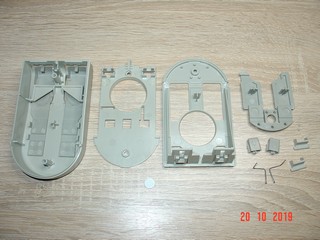 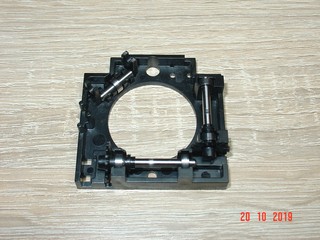 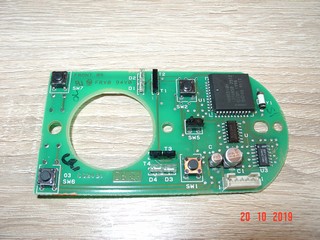 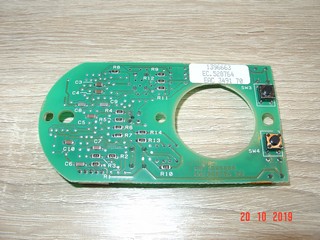 This is the smallest trackball with ball bearings I'm aware of. Five stainless MR63ZZ bearings provide great movement feel: the ball is spinning incredibly well upon light flick. The only bad thing is a switches used for all the buttons: they're simple tact buttons with hard and loud click. Device is 2-button, but in trackball mode additional small buttons are activated, serving as a click-locked versions of primary buttons. Central long switch is for mode sensing, used to swap movement direction signals according to the mode selected.

My sample was made by Lexmark after separation from IBM, and was bought non-working. Upon disassembly, I've found leaked electrolytic capacitors caused solder corrosion and lost contacts in ICs. After capacitors replacement and IC resoldering, operation was successfully recovered. Ball bearings were in bad condition due to sticky dried out grease. Unfortunately they're of non-serviceable type with permanently pressed shields. To recover them, the shields have to be destroyed: otherwise access to the internals isn't possible. 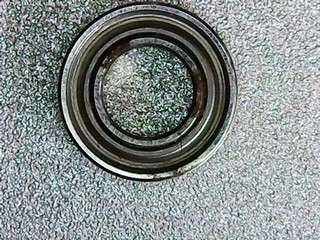 After thorough cleaning and lubrication, they're working great. I've also added fixing rings to the 5th. bearing, as it was freely moving along the axle and rubbing the edges of plastic holder.

To make device more usable, I've replaced primary switches with Panasonic EVQP0E07E microswitches. It requires some preparation: strightening and bending the output leads, to match PCB holes designed for 4-pin buttons. Also, because of height difference, internal button-actuating pins needs to be shortened for about 2mm. After that modification, click feel is really nice and light. 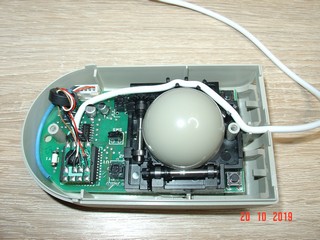 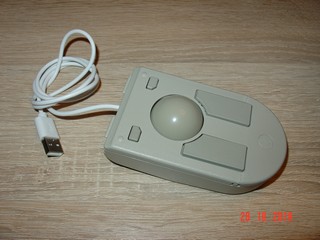 PS/2 cable replaced with USB one, witn converter glued to the device controller with sticky tape. To make device more stable on the desk, I've added two silicone feet near IBM logo. Despite small size of device and close placement of the buttons, this trackball is surprisingly convenient to use. Of course, it was used to create this article.