Marble FX is often considered to be one of the best Logitech trackballs. Very unusual design looks a bit funny, but convenience of use is tremendous: it's very convenient for long work. Ball and buttons arrangement is quite ergonomic. Additional case opening, opposite to the main operating surface, allows to actually hold the ball between fingers and thumb, when extra precision is needed. Interesting thing is, all the buttons have different direction of travel: left button is pressed downwards, right button at angle, and 3rd. and 4th. pressed sideways. It sounds inconsistent, but in practical use is incredibly convenient.

Device is dual-system: native connector is PS/2, but serial is also supported by proprietary MiniDIN-6 to DB-9 adapter. If plugged into serial port, it reports "LGI8049" to Plug-and-Play's Device ID query. For serial connection, all 6 wires are used: 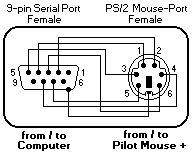 As basic PS/2 operation doesn't support anything above 3 buttons, this device requires switching the port to the extended mode. This means, it's impossible to use red button when Marble FX is connected to modern computer via common cheap PS/2 to USB converter. It seems Logitech was ready to release USB version of this trackball: MouseWare drivers include support for "Logitech USB Turbo TrackMan Marble FX" with VID_046D&PID_C403, but I've never seen it anywhere.

According to iF Design 1998 award page, this trackball was designed by Design Partners company.

Principle of operation covered by patent US5288993:
https://trackballs.eu/media/Logitech/US5288993.pdf

Unfortunately, this device was produced for limited time only. It was included in the lisl of products affected by Gart vs. Logitech patent discussion. Court has ruled out this issue in favor of Logitech in 2001, but T-CJ12 was discontinued at that time.

United States Court of Appeals for the Federal Circuit:
https://trackballs.eu/media/Logitech/00-1088-062601.pdf