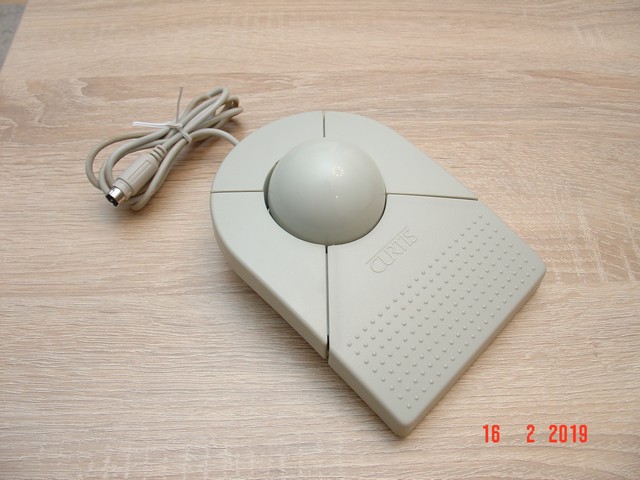 Almost unknown today, it was state of the art device comparable to popular Kensington models but with far superior mechanics. The same concept of pool-size ball freely laying on ball bearings, but with more common shutter disc encoders, not reflective with complicated sensors. Was intended for Macintosh computers with ADB interface. Overall design is quite good: fine stainless ball bearings, convenient shape covered by US patent D315552. Actual manufacturer was Primax Electronics (Taiwan): the same factory that made some of Kensington trackballs. Nice dust cover is included. 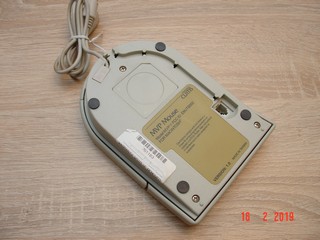 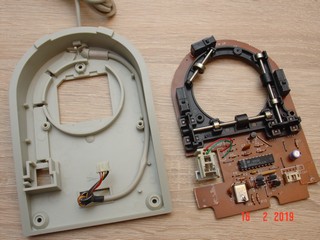 Curtis ad in 1991 MacWorld magazine, and rear side of retail box: 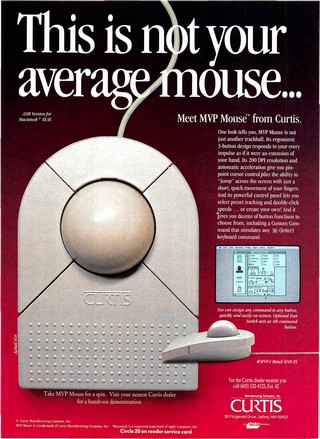 Main bearings are 693ZZ 3x8x4mm (no any marking), and support one is 623ZZ 3x10x4mm made by NMB. Unlike classic scheme, the ball is rolling not directly on shafts, but on 10mm plastic rollers surrounding them (the only questionable part of whole design). Encoder discs have 40 slots; two pairs of discrete emitters and receivers used for each axis. Calculated resolution is 230 PPR / 33 CPI; with "200 DPI" mentioned on package. 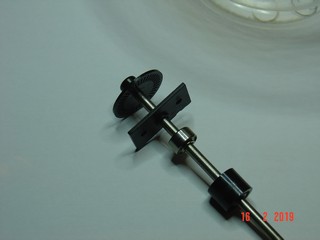 Signals from photodetectors amplified by discrete 2N3904 transistors. Controller is National Semiconductor COP822C-PLZ/N with 20 MHz crystal. Switches are NTE, about twice bigger than common Omron D2F ones. Click feel is quite good. Unusual thing is a design of buttons: essentially they're part of case, and travel direction is not vertical but merely flexing outside. In my sample, pre-travel was way too big, but it was easy to fix by putting several layers of electric tape to the cross-shaped pins actuating the switches. After that, buttons are very responsible and easy to click. 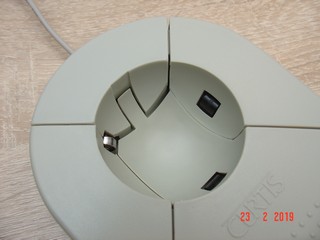 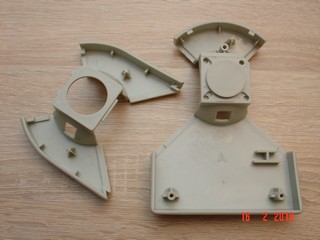 Biggest problem was the ball itself, due to unacceptable 0.4mm deviations from spherical shape. I suppose, the material used was not hard enough, and deformation actually developed during decades of storage (I bought it NOS in shrink-wrapped box), not at manufacturing time. Of course, I've replaced the ball. Another problem, this time an expected one, was caused by dried out grease. Fortunately, all the bearings are of ZZ type with easily removable side shields: simple cleaning & lubrication fully restored them.

Device is in fact 4-button: 3 actual buttons arranged as 90-degree sectors around the ball, and fourth is external, routed to the RJ-11 phone-style connector on the bottom. There was dedicated accessory: foot pedal, offered separately for $30, but obviously any external button could be hooked to that port. Included driver ('Control Panel' in Mac language) supplied on 3.5"DD diskette was capable to assign desired functions to all 4 buttons: rare thing at days when Apple tried to limit its users to 1-button pointing devices.

Currently I don't have any ADB Macs anymore, so initially I've connected it to the PC via Belkin ADB to USB converter. Left button acted as primary, right as a click-lock, and rest two ignored by converter's logic. Nice surprise was excellent acceleration algorithm: despite of low DPI, pointer movement was totally satisfactory and predictable. But there's a problem, too: often, mouse pointer is moving by itself for several pixels. This problem was mentioned in old 1992 TidBITS review, so it definitely not just my particular sample. Flaw is proved to be purely firmware-related: verified that with Saleae logic analyzer hooked to the X and Y inputs. Probably, the code was not tested thoroughly enough before production.

Movement is quite smooth, definitely better than Kensington's of the same era, and comparable to the famous models from ITAC or CH Products. Button action (after pre-travel elimination) is easy and pleasant, with very minor inconvenience of 3rd. button accessibility: it requires slight displacement of hand if you want to avoid accidental ball move. Wrist support surface with "bumps" feels really good. The only problem with case was initial instability: on my desk, trackball tended to move during operation. Reason was easy to identify: two small plastic bumps next to the rubber feet. Intended to prevent device rocking if too much hand pressure is applied on the edge, they actually prevented lower rubber feet from proper contact with desk surface instead. I've carefully removed them with sharp knife: after that, device become absolutely stable. It seems Curtis planned to make versions of that trackball for other platforms, too: package box have "ADB version" marking, and bottom of the case have rectangular hole for DIP switches typically used for device configuration at those times. In ADB model it's covered by label, but is visible on patent's drawings.: 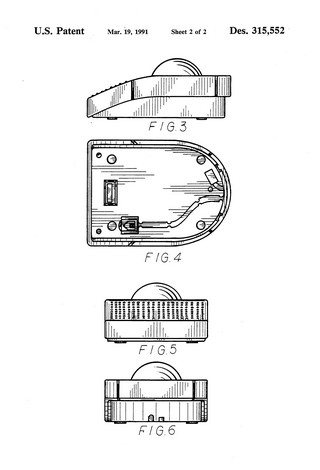 Technically, all the changes needed were a different firmware for PS/2 and/or serial protocol handling, and corresponding driver for other systems like OS/2, Windows or DOS - but I'm not aware of such versions ever released.

Compare with other trackballs of the same age and size: 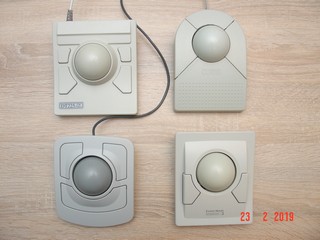 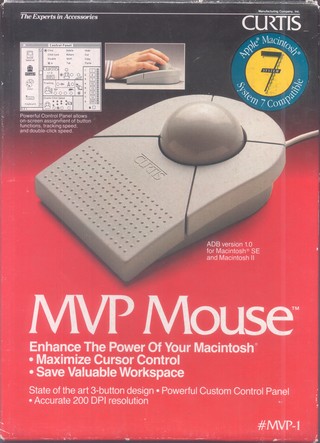 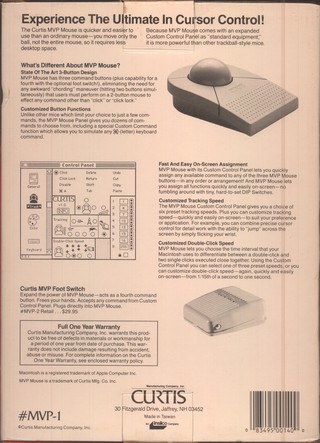 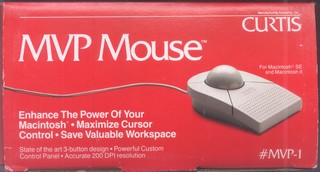 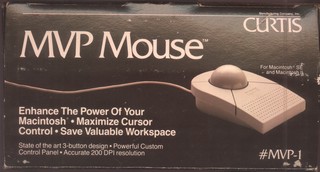 Conversion of this device to USB covered in separate article:
viewtopic.php?f=16&t=18
Top
1 post • Page 1 of 1