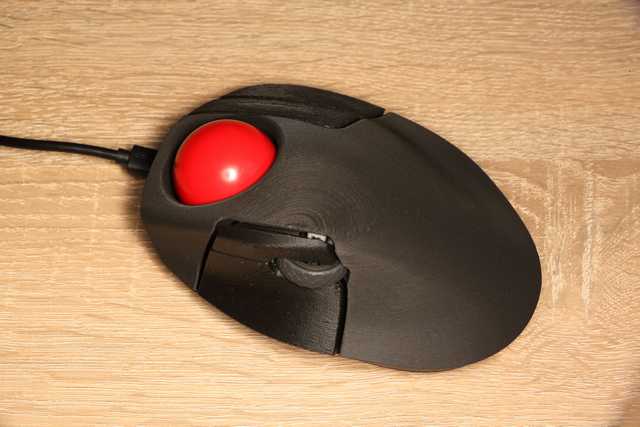 Very good device from Ploopy Corporation. The company started business with making replicas of famous Microsoft's Trackball Explorer and Trackball Optical models, and later added this Mini, buttonless Nano, and a mouse. I was not interested in former trackballs as I have genuine originals of them - but Mini seems to be completely independent product, not based on anything previously existed. It is offered as a ready-to-use device, or DIY kit to be assembled by customer. Company provide detailed guide for the latter. All the products of Ploopy are completely open source, with all required information needed to make them freely available from their GIT repositories. Also there's active Reddit community.

The Mini uses 1375cpi Avago ADNS-5050 sensor and Atmega 32U4RC-AU controller. Switches are 70g E-Switch TS20100F070S. Polling rate is 1000 Hz. Firmware is QMK-based, with plenty of tools & configuration options available. The ball is supported by unbranded MR63ZZ ball bearings (for unknown reasons, the maker insist on calling them "roller bearings" across its documentation). Interesting detail is, for the illumination of the ball surface white LED is used instead of common red or IR ones, while optical scrollwheel uses typical infra-red LEDs. 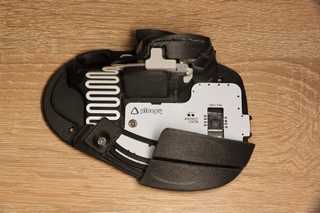 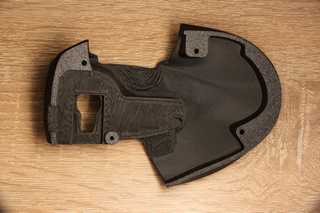 Quality of PCB is outstanding: I only can compare it to the Sony DMW-C4 or GameBall. The casing is 3D-printed, with some expected imperfections - but tolerances are quite high, and assembled device looks nice enough. The tactile feel of outer surface is also good. Connection cord is detachable (MicroUSB connector): formerly quite common property for wired trackballs, but almost extinct nowadays. 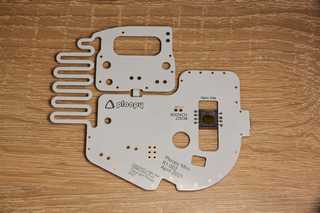 To simplify manufacturing and assembling, quite clever solution is implemented. Both PCBs are made as single piece, and instead of common ribbon cable interconnection, it's done with flexible serpentine-shaped band integrated on the same board. Bearings are inserted into case's cavities using plastic rods: 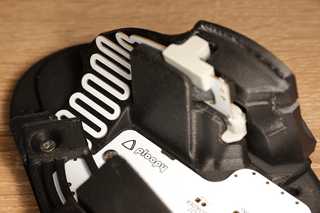 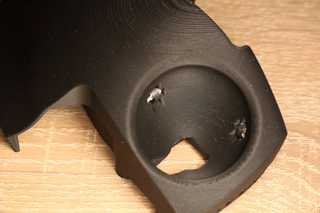 Despite the name it's actually medium-sized trackball, comparable to Elecom Deft Pro or Kensington Orbit Fusion. Scrollwheel is absolutely smooth, and also acts as traditional middle-click button. Funny thing is the default button assignment: the right-click button is physically located on the left side of device! Such unusual arrangement was introduced by Microsoft in their trackballs, and so inherited into Ploopy products. Fortunately, open-source firmware makes it quite easy to restore normal configuration: all that's needed is, to rearrange some values in the keymap.c file. While there, it's worth to change default DPI setting in config.h file from 750 to max: it's more flexible to lower sensitivity later on in the OS settings. Also, after flashing VIA-compatible firmware, the device is easy to configure using convenient VIA utility with graphical representation of buttons and their functions. 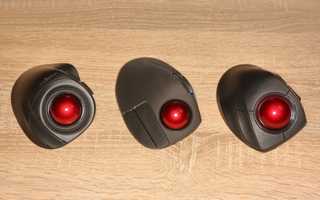 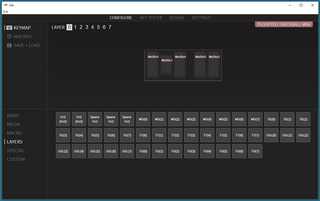 The ability to have button configuration in the device itself is nice, as you can just tune up it once, and then use on any system without further hassles. Additionally, as the device is pretty standard 5-button HID mouse, various software also could be used for OS-level button binding. It's also handy sometimes, as setting up QMK environment, playing with source code files, recompilation and flashing the firmware might be difficult for ordinary users.

In general, the device is definitely good, and ergonomically nearly perfect: all the controls are in the right places, easily accessible with relaxed palm position. Buttons travel direction and actuation force are excellent. Button clicks are soft and nice. Ball movement is very smooth, as always in systems based on ball bearings, with no sticking and a lot of inertia. Operating feel can be improved even further by using high-polished and much lighter ball from Microsoft Trackball Optical or GameBall: I'd highly recommend that. As usually, this trackball was used to prepare this article.