Founded in 1981 by Daniel Borel, Pierluigi Zappacosta and Giacomo Marini mostly for manufacturing computer peripherals, but in early years has actively developed various software packages like compilers etc. Their first pointing device was a P4 mouse in 1982. Later trackballs were added: first model was thumb-operated TrackMan Mouse (labeled T-CA1-9F with serial interface, T-PA1-9MD with quadrature and T-AA1-4MD with ADB) in 1989. To attract users, creative advertising was created, declaring this design is more suitable to the humans than classic Kensington production: 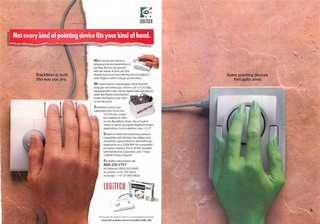 Shortly after that, Logitech started to manufacture traditional finger trackballs as well (with model that contained no common "TrackMan" word in name, labeled as First / Pilot T-MA CST2 with serial interface and CoStar Stingray T-AC CST2 with ADB), but thumb-operated ones were always present in the production range since that. For this model, the funny claim "Better than Kensington" was repeated again: 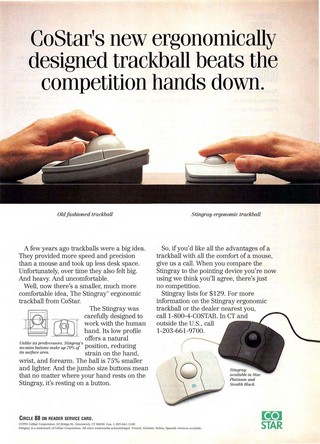 Seemingly it didn't helped much, and attempts to compete with widely acknowledged standard weren't successful - but thumb-operated trackballs, never present in Kensington product line, were appreciated by some users. Later, in Windows era, the company finally gained success in another segment, left unoccupied by rival. Essentially all the trackballs made by Kensington are perfectly symmetrical ambidextrous (with single exception only), and when Logitech has created some excellent asymmetrically shaped models, they were tremendously successful. One remarkable case of direct competition was probably with Marble Mouse and Kensington Orbit: totally different internally, they looked like minor variations of the same device:

Besides mice and trackballs, Logitech manufactured 3D-controllers for CAD/CAM market: it was initially done at LogiCad3D division, and later became 3Dconnexion company. Product range was constantly broadened, by adding various input and multimedia products like keyboards, speakers, headphones, web cameras, microphones, DVD drives, and so on.

Company's most recognized logo was created in 1988 by designer Timothy Wilkinson, who reworked it once again in 1996. In 2015, it was replaced by simple Logi text.

In Japan, Logitech operates as Logicool because of naming conflict with local company.