Probably, most acknowledged trackball vendor. Founded in 1981, it started business as Apple accessories manufacturer: one of first products was
System Saver: external cooling fan with AC surge protector. Device became quite popular: reportedly, more than 200,000 units were sold. But what is more important for us - the company is credited for the popularization of trackballs for personal computers (initially for Macintosh):
https://www.yourdictionary.com/trackball

In the late 1980s and 1990s, Kensington Microware popularized the trackball with its Turbo Mouse for the Macintosh. Turbo Mouse for Windows was subsequently released, and over the years, the Turbo Mouse evolved into the Expert Mouse and Orbit brands.

Information about people who established the company isn't easily available: one of co-founders was Philip Damiano, who was also its president in 1986 when the company was sold to ACCO World Corporation (now ACCO Brands), part of which it remains till today.

An improved word processor, Format-80, was then developed. This was sold under license by a third party, and later marketed directly by Elite Software. It was very successful and gained a substantial fraction of the market. An American company, Kensington Microware, licensed the program for production and sale in the United States of America.

I have been using a calculator software product called Kensington Adding Machine (v.1.01) on my Macintosh computers for the last 12 years.
-snip-
The version I'm using is dated 1993 Kensington Microware Limited. No one at Kensington today even remembers the product.

But main vector of company activity eventually settled in the input devices area. Very first trackball offered by Kensington - Turbo Mouse (model number #62350) with quadrature output, was actually rebranded Assimilation Process AP07045 Mac Turbo Touch trackball. later, version with ADB interface (#62352) was added. Can't find information about Assimilation/Kensington relations: don't know if it was licensing, buyout, acquisition or any other form of technology transfer. The only thing is known for sure - after 1986, on this piece of equipment Assimilation logo was replaced with Kensington logo: 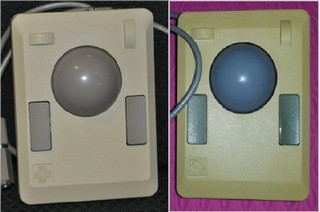 Next trackball was copied not entirely: starting from 2nd. generation of Turbo/Expert Mouse (model numbers #62358, #62360, #62364, #64100) Kensington developed its own top cover for existing outer case, while electronic components, optics, internal mechanism and sensors were used from Abaton Technology Corporation's ABPP1147 Powertouch/ProPoint trackball. Not only technology was copy-pasted, but even advertising texts. Let's compare:

The $159 device comes with a regular mouse button, as well as a second shift-lock button.

In January 1988, Abaton Technology Corp. was acquired by Everex Systems Inc., and starting from 1988, the "optical levering" is referred to the Kensington Microware Limited trackballs:

Both trackballs coexisted for some time: in MacUser Oct 1989 they're displayed on the same page:

Interestingly, both Abaton and Kensington claimed "optical levering" is a patented technology - but I was unable to find any patents assigned to these companies for that. Moreover, upon closer examination, it's clear that detection technique is essentially identical to the first Mouse Systems Corporation's optical mouse invented by Steven Kirsch and covered by US patent 4,546,347: even four-cells linear optical sensor ICs are the same, and interleaving light pattern is also produced by reflection from contrast stripes. The only difference is, the stripes are located not on mouse pad now, but on the sides of ball bearings supporting the ball.

One thing Kensington has greatly improved if compared to the Abaton's origin, was a button handling. In addition to the better arrangement on both sides of device, the buttons become fully configurable by DIP switches and software, and quite handy "chording" concept was introduced.

Design of Turbo/Expert trackball (funny enough, the company routinely adds word "Mouse" to them) became very popular, and established de facto standard of high-quality desktop trackballs. Interesting fact is - practically all the models ever produced by Kensington are perfectly symmetrical, with single exception of TurboRing #64660.

In addition to full-sized 21/4" models, more compact 40mm range was introduced, starting with Orbit #64220. Both lines are still in production currently: 40mm survived time changes as is, but 21/4" was slightly reduced by 2mm (from 57 to 55mm) in newer optical/laser models. All the 40mm models are very simple devices limited to just 2 buttons, but latest of them (#72337) finally inherited scroll ring from "big brothers", so maybe some multi-button model will also be added in the future.

Company logo was changed relatively often. After first variant, displayed at the beginnig of this article, new logo appeared at the end of '80s and was used on most trackballs of the '90s (on very first TurboMouse, just graphic part - angled square - was used):

In beginning of '2000s, textual variant was used:

At the end of '2000s, new variant appeared, with returned graphical part slightly resembling initial one:

Currently, variants with graphics and without it are used interchangeably: 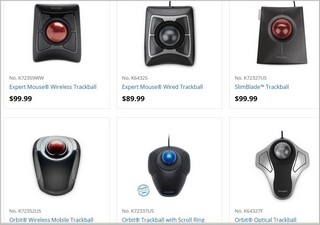 One more interesting detail: Kensington seems to have some special attention to the Japanese market. In addition to the common American/European models, some variants were created specifically for Japan, like pink and white models of Expert (#64383, #64374), and pink Orbit: 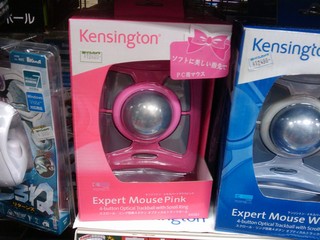 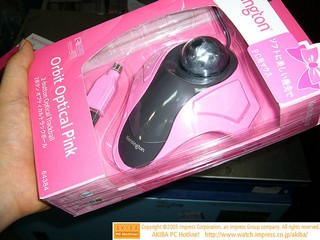